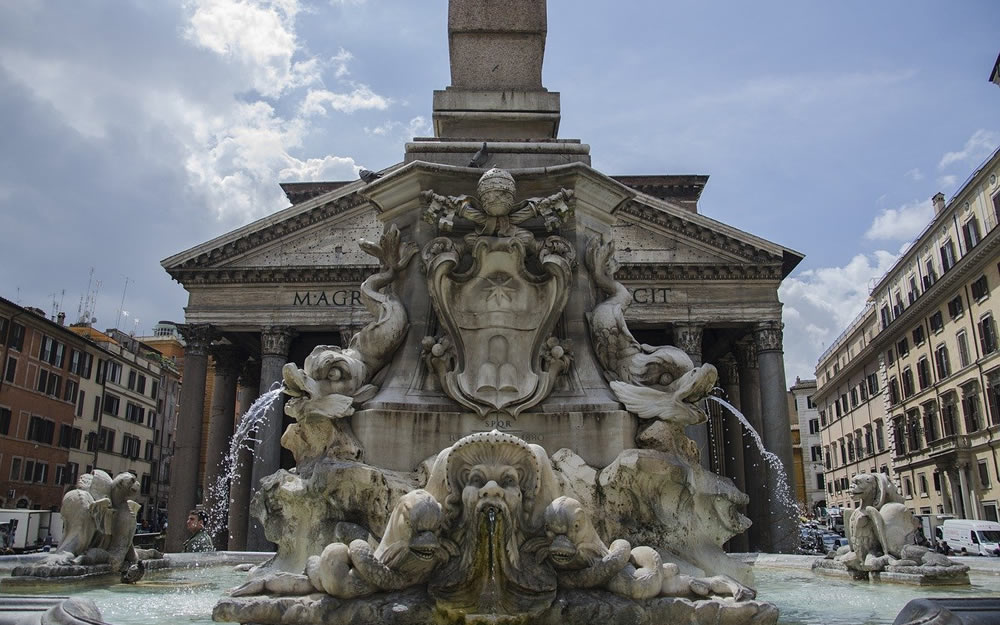 Piazza della Rotonda, with its colourful and lively venues, frames the iconic Pantheon church. In the centre, a wide basement welcomes citizens and tourists every day who stop to rest or take pictures of the majestic building.

Just above the square stands a fountain with a double name: some call it the Pantheon Fountain, others call it 'Fontana della Rotonda'. Let's discover together the history and curiosities that led to the construction of the fountain that boasts one of the most beautiful backdrops in Rome.

Who designed the Fontana della Rotonda?

The fontana della Rotonda was among the first to be built during the period of Renaissance Rome. The skillful hands behind its creation are those of the sculptor Leonardo Sormani, originally from Savona and lived during the 16th century in the capital. The monument project, however, was realized in 1575 by the architect Giacomo della Porta.

Acquedotto Vergine: among the icons of Rome

There is one feature that the capital's most iconic fountains have in common: the water that flows from them. The Fontana della Barcaccia, the Fontana di Trevi, the Fontana dei Quattro Fiumi and the Fontana del Pantheon are all fed, some only in part, by the Acquedotto Vergine.

Since the design from back in 1575, the fountain has changed several times: during the Renaissance period, the large marble basin was surrounded by three steps, adorned with four grotesque masks, each one accompanied by a statue in the shape of a dragon, the heraldic symbol of Pope Gregory XIII Boncompagni.

During the 1700s, Pope Clemente XI decided to restore the basin of the fountain: inspired by the Fontana dei Quattro Fiumi in Piazza Navona, architect Filippo Barigioni replaced stone with marble and raised the iconic obelisk. Due to the slope of the ground, five steps will be built on the southern side of the square facing the pantheon.

The masks decorating the basin today are not the original ones: in 1886, during restoration work, they were inexplicably replaced with replicas sculpted by Luigi Amici.

The history of the Obelisk

In the centre of the fountain, atop a travertine rock, rises a 6-metre structure: the obelisk of Macuteus. During the 18th century, Pope Clemente XI decided to move the monument from Piazza di San Macuto to the Rotonda, to give an extra touch to one of Rome's most beautiful squares.

Made in the time of Ramses II, the obelisk of Macuteus was transported to the capital at the time of Domitian and was originally part of the Temple of Isis.

The medieval market of the Pantheon

The construction of the Pantheon fountain dates back to the 16th century, but the square already housed a water point in the Middle Ages! For centuries, the Pantheon was the backdrop to a famous market: the shops had become so numerous that they obstructed the view of the monument.

To beautify the square in front of the Rotonda, the authorities installed a pair of crouching lions and two small basins in which traders dipped their creels to keep their fish fresh. The administration only managed to remove the market in the mid-19th century.

To learn about the most interesting sights and secrets behind the city's water points, most beautiful monumental fountains and nature trails, explore the routes selected by Waidy WOW.

Drinking fountains: why they are called nasoni

Learn about the origins of the nasoni drinking fountains, along with some fun facts. Discover how these free water fountains become one of the symbols of Rome.

The talking statues of Rome, including 2 fountains

The talking statues of Rome are one of the capital city's most iconic features. Learn about the talking fountains and find out what the pasquinate are.